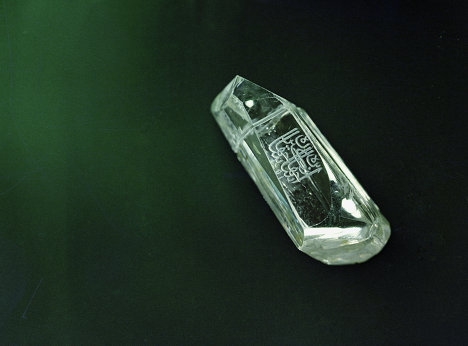 The Shah’s shape, similar to a quartz crystal, is one of the most unusual in the world of famous diamonds.

The Shah is an 88.70-carat, bar-shaped, partially polished diamond bearing three engraved markings. It was probably found in Golconda, India. The first engraving reads “Bourhan-Nizam-Shah-II, 1000” (Mohammedan calender), which places the stone in the hands of the ruler of the Indian province of Achmednager in 1591.

The next one reads, “Son of Jehangir Shah-Jehan Shah, 1051.” This refers to Shah Jehan, who completed the bejeweled Peacock Throne and built the Taj Mahal for his beloved Queen, Mumtaz Mahal; the date corresponds to 1641.

He and Mumtaz had a beautiful romance. They met while the Emperor was still young Prince Khurrum. Mumtaz was the daughter of a high-ranking palace official and was of Persian extraction. She had white skin and curling black hair that fell on her shoulders. Persian miniatures show her wearing a flaring crownlike headdress, thickly jeweled, and earrings that fell to her shoulders. She was married to the Prince in 1615 and shared all his campaigns throughout India, meanwhile bearing fourteen children.

The Shah is believed to be the stone that Tavernier, the French jeweler and traveler, saw dangling before the throne at the Court of Aurungzeb, Jehan’s son, in 1665. How the gem was later carried to Persia is not definately known; it is possible, however, that Nadir Shah, the Persian conqueror of India, took it in 1739 when he seized the Great Mogul’s treasures during the sack of Delhi.

It was during this time that the great diamond was in the possession of the Persian rulers that the third inscription, “Kadjar Fath Ali Shah,” who was the Shah of Persia in 1824, was engraved on it. A tiny furrow was also cut on the diamond, possibly to take the cord on which it was suspended.

In 1829, the Shah was given to Czar Nicholas I of Russia by the Persian Government in appeasement for the assassination of the Russian Ambassador, Alexander Griboyedoff, in Teheren; thus, it became part of the Crown Jewels of that country.

In 1914, when World War I broke out, the diamond was sent to St. Petersburg to Moscow for safekeeping. After the Revolution, when the strong boxes were opened in 1922 by the new regime, the Shah was among the treasures. It is now one of the prize possessions in the Russian Treasury of Diamonds & Precious Stones in the Kremlin.

4 thoughts on “The Shah Diamond”