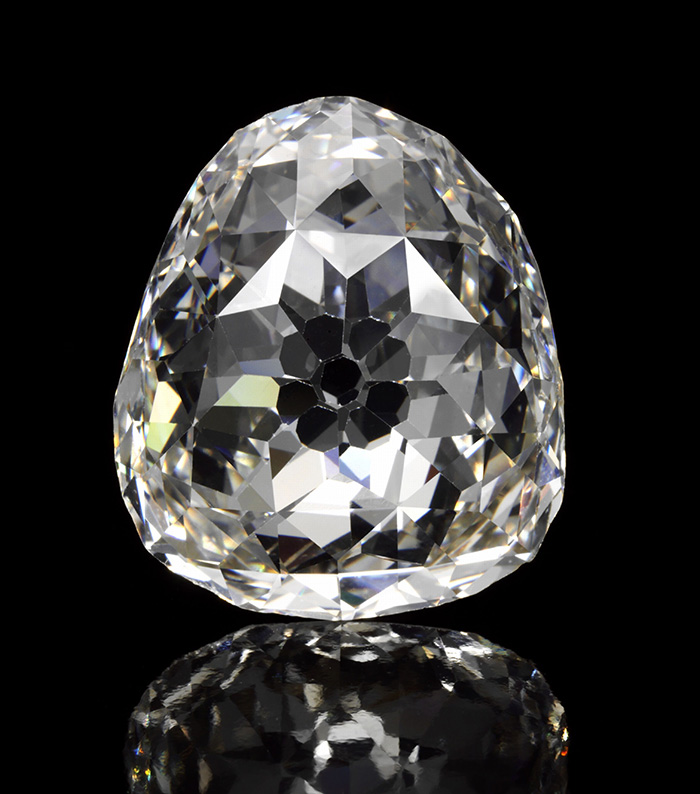 The Sancy Diamond has one of the most interesting, colorful, confused and involved histories of all the famous diamonds in Europe. It is a pale yellow 55.23-carat shield-shaped stone, apparently of Indian origin, and is said to be one of the first large diamonds to be cut with symmetrical facets. The stone is also unusual because it has no pavilion – just a pair of crowns, one on the other.

In 1570, the stone was purchased in Constantinople by the French Ambassador to Turkey, Nicholas Harlai, the Seigneur de Sancy, who was an avid collector of gems and jewelry. He brought it to France, where Henry III, who was very sensitive about being bald, borrowed it to decorate a small cap he always wore to conceal his baldness. Sancy was a prominate figure in the French Court at the time. Henry was the son of Catherine de Medici.

During the next reign, when Sancy was made Superintendent of Finance, Henry IV borrowed the gem as security for substantial loan to hire soldiers. A messenger was dispatched with the jewel but never reached his destination; thieves had followed him. Knowing that the man was loyal, Sancy made a search of him and his body was discovered, disinterred, and in the stomach of the servant the diamond was found!

Sancy sold the diamond to James I, and in 1605 Inventory of Jewels in the Tower of London.

It remained in England until 1669. Charles I, son of James I, was beheaded and his widow, Henrietta Maria, presented the jewel to Somerset, the Earl of Worcester, from whom it passed once again to the English Crown. James II later owned it, but he lost it in the disastrous battle of the Boyne and fled to France. Although Louis XIV was a pleasant and generous host to James, shabby, mournful, exiled kings bored him. James, in desperation, sold the stone to the greedy king, who was known for his love of diamonds. Louis gave him $25,000, which did much to impress James with the security value of gems in time of need.

According to another gem historian, the Sancy was sold under different circumstances. During the Civil War, Queen Henrietta Maria took it to the Continent and pledged it, together with other diamonds, to Duke of Epernon for 460,000 livres. In 1657, Cardinal Mazarin paid off the Duke and, with the Queen’s consent, took possession of the gems and bequeathed them with other fine stones to Louis XIV.

In 1792, at the beginning of the French Revolution, the Sancy and other famous gems were stolen from the Garde Meuble (Royal Treasury) in Paris. It reappeared in 1828 and was sold by a French merchant to Prince Anatole Demidoff of Russia; the prince, in turn, is recorded as selling it in 1865 for $100,000. Two years later, it was displayed by the French jeweler, G. Bapst, at the Paris Exposition, bearing a price tag of FR 1,000,000 (one million francs).

In 1906, the sancy was purchased by William Waldorf Astor as a wedding present when his son (later 2nd Viscount Astor) married Nancy Langhorne of Virginia. Lady Astor often wore the big shield-shaped gem in a tiara on state occasions. In 1962, it was one of the features of the Ten Centuries of French Jewelry exhibition at the Louvre Museum. After Lady Astor’s death in 1964, the celebrated stone was inherited by her son, the 3rd Viscount Astor. The gem is set in a mounting that permits it to be affixed to the head ornament.

The Maharajah of Patalia also claimed ownership of a ‘Sancy Diamond.’ Although this stone is similar in shape, it weighs 60.40 carats, or about ten percent more more than the Sancy of the Astor Family. The Sancy now resides in the Louvre Museum, Paris. Source: Diamonds – Famous, Notable and Unique by GIA.

I have a variety of beautiful diamonds that you may want for yourself or a loved one. If you are considering purchasing, please contact me. Since 1991, I have helped thousands of couples select diamonds and diamond jewelry. Contact me at info@galleryofdiamonds.com or call me at Gallery of Diamonds in Santa Ana, CA. 800-667-4440.

2 thoughts on “The Sancy Diamond”