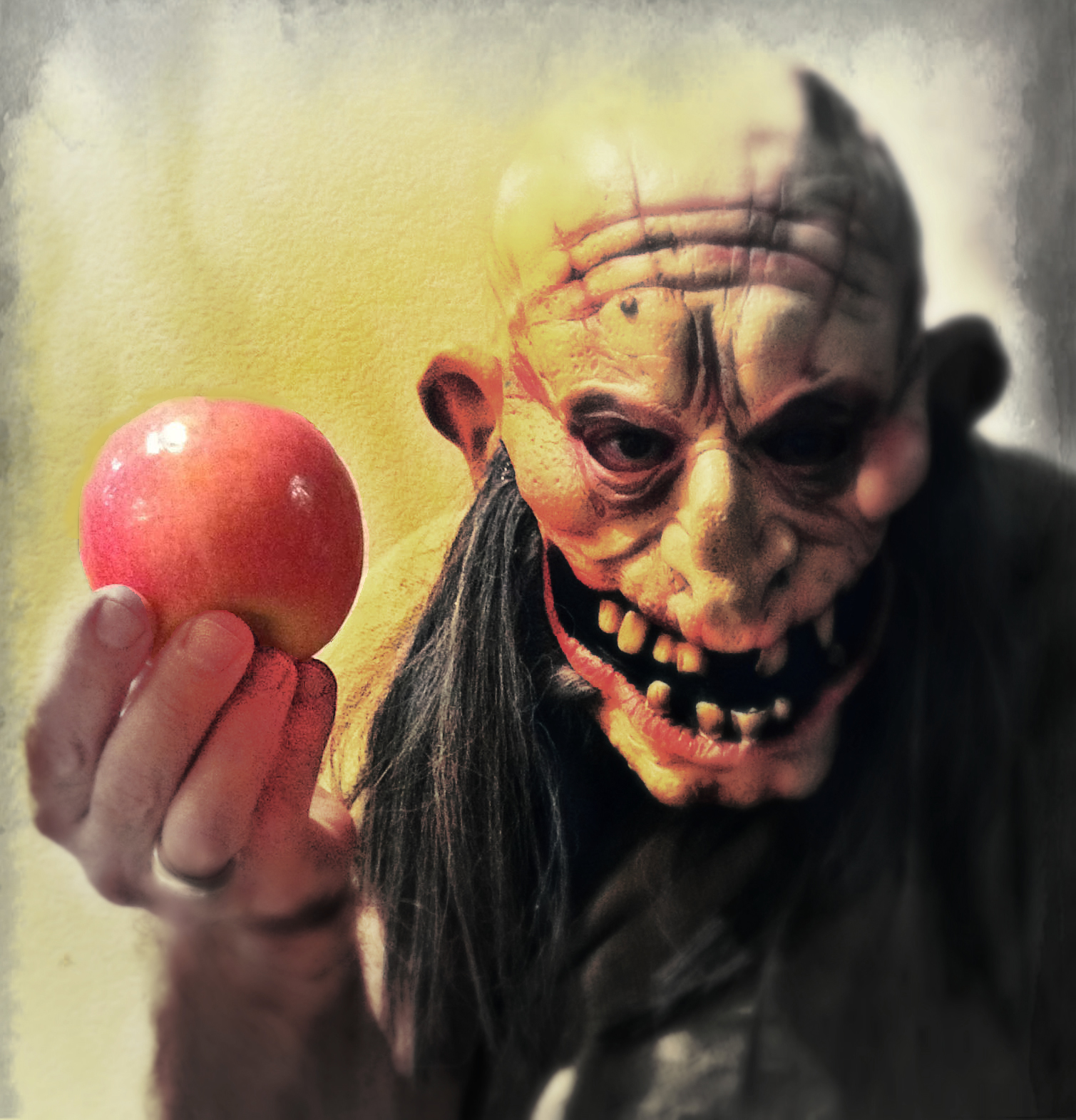 “Look mom, it’s the Apple Man again,” a trick-or-treater said as he passed me on the street for the second time.

“Is that a Fuji?” a tiny pirate sneered as he passed with his mom. I dared not answer, for I didn’t have a monster voice.

“So…how old are you?” the little princess asked, “like one hundred years old?” I pointed up, signaling I was much older.

I nodded unmonsterlylike. I stretched my arm out once again, the fresh apple dangling in my fingers.

Now that was the reaction I was looking for. There was just something downright evil about a hunched back old man with a scary mask offering a shiny apple to a child. ‘Here, little girl,’ I would mumble. The mother fixed a silent gaze on me. Was that horror I detected in her eyes? Even with no fangs or claws or oozing blood, I was the terror of the neighborhood. I angled my arm further out and slowly rotated the fruit temptingly with my fingertips.

“I read about you in a story,” the little hobo said. “Stay away from him, mom.”

I managed a hysterical cackle to add drama.

“Do you live here on Elm Street?” The mom asked without fear.

It would have spoiled the moment if I told her I lived in the house directly behind me. After all, I was the Apple Man. I should live in an enchanted apple forest. I lied by shaking my head as my wife, Carmen, waved at me while rationing Snickers from our front door. “Oh well, you are creepy, in a good way, of course. Have a Happy Halloween.” Then she left with her little hobo.

“Can we take our picture with you, Apple Man?” About seven teenage girls had their smart phones pointed at me. I nodded in agreement.

Three girls huddled to my left and three on the right. Another girl aimed and flashed. The white blare illuminated us briefly. The photographer screamed. “You scared her.” I heard one them say.

I pointed to Cinderella on my left. “I think it was this girl who scared her,” I finally spoke.

“No, I think YOU scared her,” Cinderella replied.

“Thank you, Apple Man,” they all said while scattering away.

I arched my back and limped to the middle of the street. A small van approached slowly with bright beams. I outstretched my arm, seducing the driver with my Red Delicious.  As they stopped next to me, I saw mom-dad in the front and two creatures in the back. Probably the family was searching for a neighborhood that was offering Snickers to the hungry goblins.

“Look kids, he wants to give you an apple,” the mom spoke like I was an old friend. “Go ahead, take it, Johnny.”

From out of nowhere a little masked man emerged from the back seat and grabbed the apple from my hand. “Uhmm, yummy apple,” he said in a sinister voice. He stuffed it in his candy-filled pillowcase and proceeded down the street with his witch sister behind him.

Defeated, I returned to my house.

“Did you have a good time, sweetie?” Carmen said as she met me at the front door. “Did someone take your apple again?”

“That’s always gonna happen,” she said. “After all, you are offering it.”

“Don’t worry,” Carmen said. “If you need more fruit I have some bananas in the fruit bowl.”

I appreciated the concern, but there was absolutely nothing evil about a banana. In fact, bananas are funny. Even with the scariest costume, everything about a banana is hilarious. Oh well, I thought. At least I had another year to plan next Halloween. I unwrapped a Snickers and stuffed it into the mouthhole of my mask.

22 thoughts on “The Apple Man”