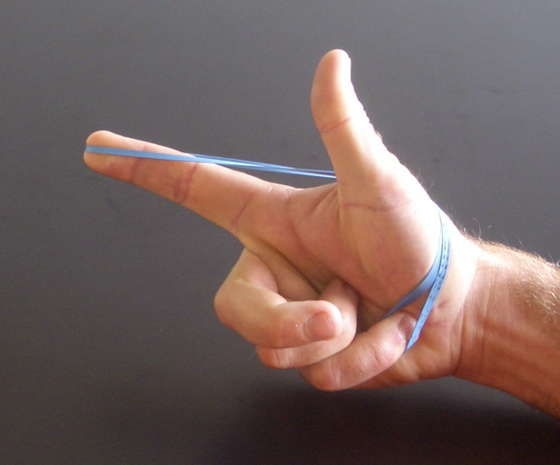 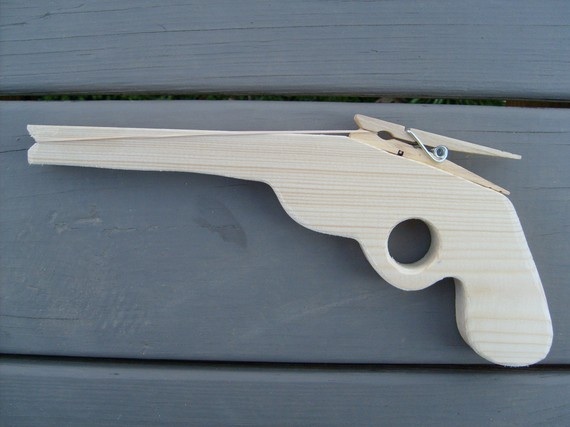 “I’m gonna shoot ya, dad,” Trever said with a grin as Dad was relaxing in his favorite chair.

“Trevor, put that darn thing down. You could put my eye out.” Dad raised his newspaper above his nose for protection.

Trevor’s dad worked as a pipe fitter and always brought home cool giant rubber bands for him to play with. They were about six inches long and an inch wide. With sufficient strength, one could stretch the band three times its length. It didn’t take Trevor long to realize that these bands could be converted into the world’s deadliest weapon.

His uncle finally yielded in his wishes to construct a wooden rifle, and mounted a giant clothes pin at the butt. Trevor would place a band at the blunt point, then stretch the band with all his might to the opening  of the clothespin. When the clothes pin was depressed, the band would shoot with such force one could hear a swoosh as it cut through the air and crack loudly against the wall. With practice, he was able to knock over a large book with a Coke can from across the room.

Now Trevor was really taking his chances as he pointed his weapon at the man who was kind enough to furnish the ammunition.

“Boy, please don’t aim that thing at me. I only have one good eye and you could make me blind.” Dad lowered his paper to look Trevor in the eyes.

Trevor aimed the weapon directly at his dad, and imagined shooting a grasshopper off of his head. The clothespin was sensitive, and he was careful not to squeeze too tightly on the release.

“I’m gonna shoo…” Then it happened. Trevor could still see the event in slow motion as the clothespin released the grip of the band and watched it shoot with such power that it made a loud snap right in the middle of his dads forehead. Trevor’s eyes widened in disbelief. He stood frozen as his dad proceeded to rise from his chair, already having his belt halfway out to whip him. The rubber band gun was a single-shot weapon. Dads belt, on the other hand, could be used over and over again until Trevor’s butt was red.

Trevor turned and ran, but it was too late. His dad already caught up with him and whacked him with each of these ten words, “I… told… you… not… to… point… that… thing… at… me! ”