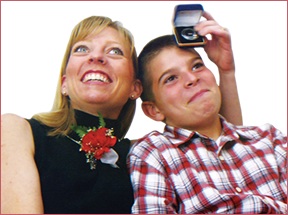 Gallery of Diamonds will once again award two quarter-carat diamonds valued at $599 to the students who write the most creative essays.
Contest deadline is December 27th, 2013.  Schoolteachers can obtain entry forms at www.WhyMomDeservesADiamond.com or call 1-800-667-4440.

The Story of Why Mom Deserves a Diamond

The foundation of the contest began while I searching for my own birth mother as a child. Although I had a strong bond with my adoptive mother, I was always curious about the woman who gave birth to me.

I was born and adopted in Indianapolis in 1958. I spent my early life in New Albany, where my adopted parents raised me. My adoptive mother gave me the only identifying information she had, which was a copy of the medical bill from the hospital I was born. The bill showed my mother’s name (Betty Price) and her age of 22. Armed with this skimpy information, I began a search that lasted nearly 20 years.

About the same time I started my quest, I entered the jewelry business as an errand boy for a store in New Albany. I later joined a retail chain, worked throughout the Midwest, and moved to California in 1989. In 1991, I opened Gallery of Diamonds Jewelers.

As a teenager, I made two trips to Indianapolis to meet the courthouse judge. On both occasions, I was told my records were sealed. On the second trip, after much pleading, the judge gave me the report by the Department of Public Welfare which contained more information about my birth mother. I explored the small Indiana towns that were listed in this report but ended up empty-handed.

Years later, after opening Gallery of Diamonds, I again turned to that same document the judge had given me. The document stated that my birthmother had been previously married before my adoption and listed a wedding date. It did not say where she was married, so I contacted every county in Indiana to locate a copy of her wedding license. Finally, in mid-1994, received a copy of a wedding license from the courthouse in Coatesville, Indiana. The wedding date on the license matched! I found that my birth mother’s maiden name was Stewart, and that her parents names were Otis and Hattie Stewart. I then found the telephone listing of Otis Stewart (my grandfather.) I called my grandmother who said no one knew I was alive because my birth mother told the family I was stillborn. Then she admitted that my birth mother herself had died in 1981.

Although I did not get the chance to meet my own birth mother, I was fulfilled in finally meeting my biological family including three siblings in 1994.

Even today, the adoption records of many states are sealed. Only after I received a copy of my mother’s death certificate was I given permission to receive a copy of my original birth certificate. In other words, I had to prove to the State of Indiana that my mother was dead before I was allowed to know that I was born! There was no pertinent information of my birth certificate. It stated my father as “unknown” and my name as “infant.” Nevertheless, I speak for all adult adoptees across the nation that we have a right to have our original birth certificates and to know our origins. We are not searching for a mother. We are searching for our past.

I founded the Why Mom Deserves a Diamond contest to allow school kids to express their feelings about their own moms. The most creative writer receives a loose diamond to give to their mothers and many other kids receive other gemstone prizes. The contest has become increasingly important for kids to express their appreciation for their own mothers, especially while they are still living. The contest also helps fulfill the state’s Common Core Standards for figurative writing.

Every year, nearly four thousand families come to Gallery of Diamonds Jewelers to recite their essays and celebrate a family experience.

In 2009, the Why Mom Deserves a Diamond contest became incorporated and in 2010 it became a franchise.

Following are a few essays that were submitted to Gallery of Diamonds in 2013:

“Special like an antique vase. Her eyes sparkle like a diamond. Her hugs are so warm they could melt a polar bear.”

“Sparkling blue eyes, with beautiful blonde hair, and hugs like a teddy bear. Her beautiful smile could melt Antarctica.”

“My mom could cook a dish for the president! She can run a marathon on the moon.”

“Like a rain drop, I fall into my mom’s puddle of love, care, kindness, and thoughtfulness. Like asteroids, I fly into my mom-love-planet.”

“My mom is the inspiration of Mozart and is worth more to me than a solid gold house and a tiger.”

“Help! Emergency! She had a horrible fall. She fell out of heaven. She’s an angel! That’s why she deserves a diamond.

As pure as an angel in heaven, hugs and kisses sweet as chocolate. Patient as a lion in Africa, ready to pounce.”

“My mom is my rocket and I’m the gas, so we fly through space, so peacefully and gracefully for ever and ever.”

Michael (Diamond Mike) Watson is the president of Gallery of Diamonds Jewelers and the CEO of Why Mom Deserves a Diamond, Inc. For more information, or if you would like to become a senior sponsor of the contest call 800-667-4447, or visit www.WhyMomDeservesADiamond.com.

2 thoughts on “22nd Annual Why Mom Deserves a Diamond contest”