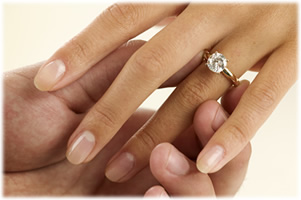 “What do you mean, you can’t do it?” Diamond Mike Watson asked the small-framed Vietnamese programmer.

After five hours of tinkering at the master computer at the headquarters of Gallery of Diamonds jewelers, Lan Dong finally admitted it would be impossible to make Diamond Mike’s demands come true.

“This may take thirty to forty more hours of programming. I think I will be able to locate four percent of males ages 20 to 40 that have just arrived at or left a restaurant, a bar, or a religious establishment.  But there is no way I can tell if they are in a relationship, want to get married, or want to buy an engagement ring.”

Diamond Mike peeked up from the diamond he was appraising.  A perfectly cut diamond gleamed brilliantly in his tweezers.  Paying $450 per hour was pocket change, he always thought, if a computer genius could make Gallery of Diamonds a more efficient diamond trading company.  It was against the Gallery of Diamonds rules, however, for any paid worker to claim anything was impossible.

“Thank you, Mr. Dong, for your services. Here is your check for five hours rendered. Have a nice day.” There was no sense in getting angry. It was indeed a far-fetched dream. Maybe it was anthropological, but Diamond Mike knew that a man in love could decide at any moment to invest his entire yearly salary on the woman of his desires. Mike’s diamonds came with strict grading, free lifetime inspection, and low prices that no other dealer could come match. His dream was to notify every man who was searching for this precious stone that would symbolize a lifetime relationship.

Diamond Mike was certainly not a greedy diamond merchant, but was simply passionate about his business. He even gave diamonds away to children who wrote the most creative essays about their mothers in the Why Mom Deserves a Diamond® contest. He knew a man in love was impulsive and elusive. At any moment, a man could be spellbound by Cupid’s invisible arrow, summoned to the nearest jewelry store, and pour out his hard-earned money onto a granite sales counter.   He understood how the modern world attempted to turn beautiful diamonds into bland commodities, and offered them on every street corner including department stores and television shopping channels.  The joke in the business was that diamonds would soon be sold in grocery stores. He knew that a man would make his final choice from a sad list of resources, and be left feeling empty.  If he only had the right connections, he would possess a gem that would contain a tiny piece of the honest diamond merchant that sold the gem to him.

He was tired of men complaining that they paid too much at their corner jewelry store, or being misinformed about the quality, or that the stone fell out, or chipped, or cracked.  To Diamond Mike, a diamond was far more than a precious gem, but an eternal symbol of a man’s love.   Diamond Mike never bothered with what others thought of him, but if a man ever invested in the king of all gems, born from the earth and reborn on a woman, he wanted it to be from Gallery of Diamonds.

Orville Klingster from NDii, Inc. arrived ten minutes early the following morning. Orville was a self-proclaimed computer genius that sold himself well over the telephone, and whose voice resonated with confidence and charisma.  His appearance, on the other hand, did not match his voice. Orville was huge, out-of-shape, and slow moving. At least he wore a tie, but the knot was overly thick and drawn tight around his collar.

“Yes. I will not charge you extra because I arrived early. I will accomplish your dream.  Please authorize this standard form saying I will be paid $950 for each hour worked. As I explained on the phone, I will need a retainer of my minimum charge of $10,000 to begin.”

Diamond Mike admired confidence, and had not witnessed it in such a long time. He believed anything could be accomplished, no matter one’s appearance, simply with good intentions and an unshakable belief.

“Can I have that?” Orville pointed at the hungry-sized ChocoCream in the customer candy dish.

“Be our guest, Mr. Klingster.”

“Show me the computer with the master files,” Orville said before he finished swallowing. “What is your administrative password?”

Even the key personnel did not know the master password that also commanded the current wholesale prices of polished diamonds in Tel Aviv and Belgium. He knew that when Orville left, he would have to devise another secret word. Diamond Mike looked over each of his shoulders then wrote “DiamondMission” in small letters on a piece of scrap paper and slid it towards Orville.

“Before we begin, Diamond Mike, may I make a suggestion?” Diamond Mike nodded.  “If you want to sell your diamonds, why don’t you just advertise in bridal magazines?”

“Mr. Klingster,” Diamond Mike began firmly. “I did not hire you as a marketing consultant. Please complete your mission.”

Diamond Mike was hardly ever diplomatic when sharing marketing ideas with others. He had began his career at seventeen, at a time when a young man had only one design option for his fiancé’s engagement ring: a single diamond set in four prongs.

He considered jewelers who advertised in bridal magazines ones who threw their money in the trash. The same went for those who advertised in media that sold wedding cakes, wedding dresses, and Hawaiian honeymoon vacations.  The dilemma was that by the time a girl was dreaming of these accessories, it was too late, for she already had the diamond on her finger.  The rock came first, the limousine ride came second.

“Was anyone going to eat the other ChocoCream?” Orville asked.  Diamond Mike reached over and tossed the large brick of candy to Orville.  “Thanks. They say sugar is food for the brain.” Orville peeled the foil wrapping like a banana peel and took a large bite.”

While Orville painfully pecked one key at a time, Diamond Mike admired a three-carat diamond under the Spectra Light. The proportions were perfect, and the gem shone with colors constrained deep inside its crystallized carbon walls. The stone breathed life into any observer, and was a hard-to-find treasure. Through the barrage of mass advertising, it would be difficult for a man to discover a gem like this.  He would be mesmerized by another stores fancy guarantees or puffed appraisals. He may even be lured to take the gem home, and make high interest installments for the rest of his life.

An hour passed. From the angle Diamond Mike was sitting, it appeared Orville was sleeping. His head was lowered and his hands were relaxed on each side of the keypad. One hand still held the empty remains of a metallic purple candy wrapper. Either he was daydreaming into the computer screen or he fell into a chocolate coma.

“Wake up, Mr. Klingster!” Diamond Mike screamed from his desk.

Startled, Orville sat erect. “Hey, I wasn’t sleeping!” Orville snapped back.  “Do you want to give me a heart attack? I am programming, and when I’m programming I need to think.”

Two more hours passed, and Diamond Mike did not remember Orville tapping more than a dozen key strokes.  Then he saw Orville lift his huge finger into the air and dove in slow motion with a final stab into the middle of the keypad. “I am finished!” Orville exclaimed loudly as he sat upright with a grin.

Startled, Diamond Mike almost dropped a new shipment of diamonds onto the floor. “Finished with what, Mr. Klingster?”

“I think I have what you want, Diamond Mike.”

“For God’s sake, Mr. Klingster. Please tell me what you have.”

“And how do you know that?” Diamond Mike asked with anticipation.

Men who are newly in love hold an image of their loved one in their minds for several minutes at a time, and often throughout the day and night. When a man is in love, he constantly daydreams of his lover, and “sees” her in every car that passes, in every picture he admires, and in every song on the radio.  There are also measurable endorphins that are associated with this mental imaging. The new technology of EMI, or endorphin-mental imaging, can now be detected through new cell-phone technology. Activating this computer script will give you a list of these men’s emails and telephone numbers.  It may not be one hundred percent accurate, because stress or anxiety may skew the results.”

“I’m a genius, Diamond Mike. That’s why my fee is high. You will now be able to get real-time love vibrations from every man who holds a cell phone to his ear.  Pressing the second button will send an email, making them aware of Gallery of Diamonds’ engagement ring services.”

“Press the button now!”  Diamond Mike commanded from his desk.

“Are you sure you don’t want to do a test first?” asked Orville.

“What’s the worst can happen?” asked Diamond Mike. “…save another poor soul from going to Jimmy’s Jewelers?”

Orville clicked the purple icon on the computer screen.  Within two minutes, all the lights blinked on the company telephone lines.

“We have a diamond order, Diamond Mike,” an assistant said. “He wants to know how soon you can send him a one-carat diamond in a simple four-prong 14K setting.”

“You are a genius, Mr. Klingster,” said Diamond Mike, as he gazed at Orville’s business card.   Can I ask what does NDii stand for?”

“Sure, Diamond Mike. It stands for No Dream is Impossible.”

2 thoughts on “No Dream is Impossible”