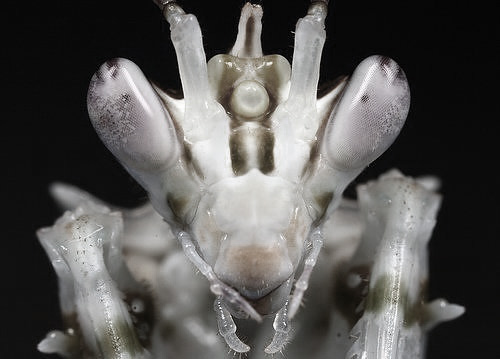 I was already tense from reading the book, “Creepy Insects of the World,” so I didn’t think about the tickle I felt on my left arm close to my shoulder.  Carmen was on my other side watching some kind on Alien movie.  I felt it again in the same spot, then calmly moved the book over and raised my head back to focus on my arm.  Sure enough, there was the tiniest blur of a moving object.

I placed my head into a position to focus my glasses onto the small, gray spot.  I gazed through my bifocals to get a close up.  The bug appeared to have six legs, with its front two arms reaching up like a miniature praying mantis.  Surely a creature so small could do no harm, I thought.

“Aliens have now attacked the major metropolitan center of Chicago,” the TV blared as Carmen was munching on Snack Crisps.

“Just a minute, this is the good part.”

I returned my head back in an awkward position to focus sharply on the uninvited guest.  As I squinted, I could see the creature making human-like animations.  First, it probed my arm with its right forearm, and then repeated the behavior with its other arm.  Peering closer, it appeared the non-winged creature was actually contemplating the skin samples it was conducting.  It moved its head independently from its arms, and seemed to approve of its scientific findings.

Then its head twisted and looked directly at me with two microscopic eyes. I was positive the life-form was aware of my presence.  It raised it’s antennae upward and together and pointed them towards my nose. I swear I detected a tiny beam of light emitting from the end of the antennae.

“Aliens eject a microscopic species of life in residential area!” Carmen had her full attention on the TV and almost missed her lips as she attempted to insert another Snack Crisp into her mouth.

“Carmen, look!” I said louder, pointing to my arm.

“What, Michael? You always bother me when I’m watching TV.”

“No, really. You have super close-up vision.  Can you please put this thing on my arm in a jar so we can see what the heck it is?”

“Eww, looks like a spider.” Smack!  Carmen slapped my arm and squished the creature into an unrecognizable dot of gray liquid.

“Why did you do that?”  I complained.

“Don’t like any spiders in the house.  And I sure don’t want any crawling on the ceiling while we are sleeping.”

“Scientist calling the new life-form ‘gray scavengers,’ the TV said.  “Some humans have been inflicted with sharp laser stings from their antennae.”