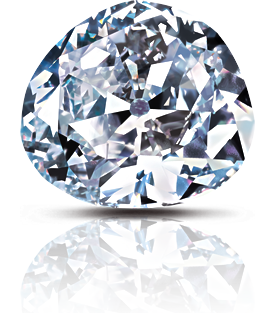 The first authenticated fact of the Idol’s Eye was its appearance at a Christie’s sale in London on July 14th, 1865. It was knocked down to a mysterious buyer simply designated as “B.B.” Later it is stated that the 34th Ottoman Sultan, Abdul Hamid II (1842-1918) owned the Idol’s Eye. However the Idol’s Eye would never have been set in the eye of a temple in Benghazi because there are neither temples nor idols in that city.

The shape of this diamond – something between an Old Mine cut and a triangular brilliant – looks like an eye. The stone compares favorably with others deemed to have been set in this manner which suggests that certain idols found in sacred buildings in the East have had very oddly-shaped eye-like orifices. The Idol’s Eye weighs 70.21 carats, possessing a slight bluish tinge.

Abdul Hamid II presided over the most autocratic regime that the Ottoman Empire had experienced since the 1700s. It is said that the Sultan, sensing in which direction the politcal wind of his country was blowing, made provisions for his coming enforced retirement, which included the despatch of his jewels to a place of safety. Unfortunately the servant entrusted with them turned traitor and sold them in Paris. Whether or not this is the true version of events, it is known that the Idol’s Eye was one of several large diamonds belonging to the deal Salomon Habib that came up for auction in Paris on June 24th, 1909. Afterwards a Spanish nobleman bought the diamond which he kept in a bank in London for some years.

After the end of World War II the Idol’s Eye re-emerged when it was acquired by a Dutch dealer, from whom Harry Winston bought in 1946. The following year, Winston sold the stone to Mrs. May Bonfils Stanton, daughter of Frederick G. Bonfils, the publisher and co-founder of the Denver Post. If many of the earlier characters associated with the diamond’s history have proved to be ficticious, Mrs. Stanton goes some way to make up for them. From her early childhood she displayed an interest in jewels and began to assemble a famous collection. She lived in beautiful isolation in a palatial mansion, and was said to have worn the Idol’s Eye at her solitary breakfast every morning. The gem was set as the pendant to a diamond necklace containing 41 round brilliants totalling about 22.50 carats, plus another 45 baguettes weighing about 12 carats.

The Chicago jeweler Harry Levinson bought the Idol’s Eye for $375,000, for his wife, Marilyn. In 1967 he loaned it to De Beers for an exhibition at the Diamond Pavilion in Johannesburg. Six years later in 1973, Mr. Levinson put the diamond up for sale in New York but subsequently withdrew it when the bidding failed to reach his $1,100,000 reserve. In 1979 Laurence Graff of London purchased the Idol’s Eye. Harry Levinson loaned the diamond, before it was sold to Laurence Graff, for display at the Metropolitan Museum of Art in New York, at a 1982 reception celebrating the 50th anniversary of Harry Winston Inc. In the following January, Mr. Graff sold the Idol’s eye.

2 thoughts on “The Idol’s Eye Diamond”