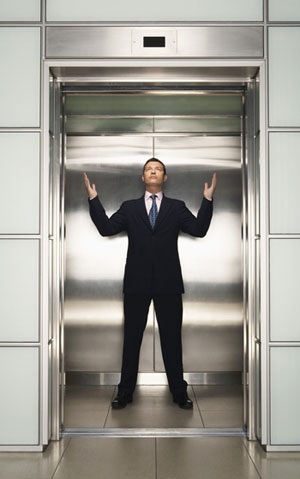 “They pay for parking if you save your receipt,” said the lady slumped next to Jon Baskerville in the juror assembly room.  The lady wore a floppy top with a large clamp-on tag saying 124 California.

“Yeah, thank you. I have my ticket in my pocket for validation,” Jon replied. What happens next?”

“You get one of these beauties,” the lady pointed at her official jurors badge, now almost hanging sideways from her blouse.

“Very fashionable,” Jon jested as he checked his cell for the time.

“My name’s Lonna,” the lady said with an outstretched hand.

“I’m Jon. I’m not sure how I got here. My wife said the jury summons that came in the mail looked pretty official. You know, the kind that makes you feel like if you don’t come they will throw you in jail.”

“Do you always dress in a pin-striped suit this early?” asked Lonna.

“Yes, my job requires that I’m dressed a notch better than my clients.  I guess it makes them feel like I know what I’m doing.”

“When a city builds a new skyscraper, they need something that transports people to each floor. That’s where my company comes in.” Jon scribbled a weird formula on a small notepad and slid it back into his vest.

“So you build stairways?”

“No, Jon laughed. We sell elevators.  Why do you think America is overweight? The average person avoids lifting even one step if they can prevent it. People love to simply press a button and be transported somewhere else.  It makes them feel powerful and invincible.”

“The salespeople do, that’s for sure,” Jon began. “I’m actually the software developer. Do you know all those buttons that turn colors as soon as you press a floor number?”

“I’m the guy that makes sure the elevator does not go to the fifteenth floor and the third floor at the same time.”

“That would be impossible,” said Lonna.

“Maybe, but don’t think it wouldn’t try. An elevator has a brain, just like a human. It has to always make split second decisions.  When several people press a bunch of buttons at the same time, the elevator has to know where to go first.  For example, what if you are on the first floor and someone presses 16 and another presses 2?  The elevator has to know to drop off the second floor passenger before rising to the sixteenth floor.”

“Very interesting,” said Lonna, as she straightened her badge. “Be prepared for an all day adventure, Jon. You may be sitting here for hours.  Hope you don’t have an appointment.  Besides, being a juror is very noble.  The last time I was here a husband beat his wife to a pulp.  We all knew he was guilty, and I was happy knowing justice was served.”

Jon had so many thoughts in his head and hardly heard Lonna.  “And what if someone hops on the third floor and wants to go to the fifth?  Should the elevator drop off the passenger at the fifth or should it ride the passenger all the way to the highest floor already pressed? I’m telling you, Lonna, sometimes an elevator gets frustrated just like a person.”

“Of the people, by the people, for the people. You can make a difference!” the intercom blared.  A giant white screen slowly unfolded from the ceiling. The American flag flapped in the breeze. “A trial by jury is what makes our nation strong. Now is your chance to weigh the evidence that will be presented so justice can be served.”

“So, how’s business?”  Lonna immediately knew she should have mentioned the weather instead, for Jon was ready to answer.

“Sometimes we make money, sometimes we lose money,” Jon began. “But you can’t believe all the things that can go wrong, like if there is a fire or the electricity goes out, or if the elevator gets stuck between floors, or if the software has a glitch. People also want to get to the bottom floor quickly but they would prefer not crashing. I haven’t got all the bugs worked out, but we are starting to upgrade the software for our former clients.

“Justice must be served.” the projector screen showed a judge’s gavel being slammed.

“I heard our lunch recess is at 12:30,” Lonna tried to change the subject.

“The software has to work flawlessly. One crazy woman sued us just because she was stuck in the dark for twenty minutes.  She claimed she had claustrophobia and now she has a permanent fear of all elevators.  The bug I’m trying to fix is the very small chance the drive shaft cord could become compromised if someone accidentally pressed two buttons simultaneously. And then again, there is always that one fool passenger who likes to play bellboy, who asks everyone which floor they want, and presses buttons like crazy.”

“True, but life is dangerous, right?  What are the real chances that you are going to be hit by a bus?  What are the odds that a meteor will come crashing down on your house?” Jon fetched his notepad and added a few symbols to his last formula.

“There’s my cue. Good luck to you,” Jon said to Lonna as he rose and straightened his tie.

An older woman with no expression and a monotone voice greeted Jon at the window, “Here’s your badge. Go to room number twenty-one on the sixth floor.”

Jon shuffled through the crowd of possible jurors into the hallway.  He dreamed about his bonus if he closed his last deal.  Of course life always come with obstacles, and he worried about the new software upgrades that were being installed in the older buildings.  His new software was intelligent, but he had time to revise it. Still, he knew that several of the updated elevators were becoming finicky when too many buttons were pressed at the same time.

“This is the big one!” A heckler shouted from the end of the hallway. The oversized hanging photo of the first county judge broke onto the granite floor. The plant by the water fountain collapsed.

The door of the lobby elevator opened and revealed four passengers slumped over each other and moaning.

‘Dear God,’ Jon thought. ‘Someone must have pressed two buttons at exactly the same time.’

“You can make a difference!” The intercom continued to boom from the assembly room. “Justice must be served.”

10 thoughts on “The Elevator”