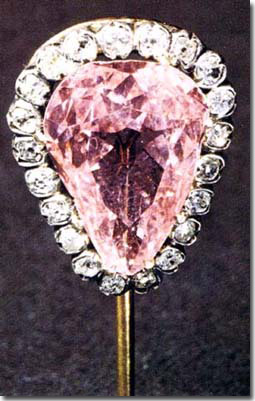 The Pink Condé is one of the most unusual of the world’s notable diamonds: a light pink pear-shaped stone of 9.01 carats. Agents of Louis XIII are said to have bought the stone in 1643 after which the King presented it to Louis de Bourbon, Prince of Condé, who had distinguished himself as Commander of the French Army in the Thirty Years’ War and who became known as the Grand Condé. Until his death in 1686, the Prince was known as an enthusiastic patron of the arts and an ardent admirer of various charming women, one of whom described him as a much more effective and able general than paramour!

The diamond remained in the Condé family until the Duc d’Aumale bequeathed it to the French Government in 1892. Today, it is on display in the Museé de Condé in Chantilly, France, where according to the terms of the Duc’s will, it must always remain. On October 11th, 1926, the diamond was stolen from the museum but later found and returned. It is also known variously as the Condé Pink, the Condé Diamond, or Le Grand Condé.

The Pink Condé is definately not the average type of diamond I sell, but I do have a variety of unmounted diamonds from a quarter-carat up to five carats. I would love to brag about selling a huge natural pink diamond, but those transactions are few and far between. If you are considering purchasing a diamond for yourself or for the person you love, please contact me first. Since 1991, I have saved thousands of couples from paying inflated prices on diamonds and diamond jewelry. Contact me at info@galleryofdiamonds.com or call me at 800-667-4440.