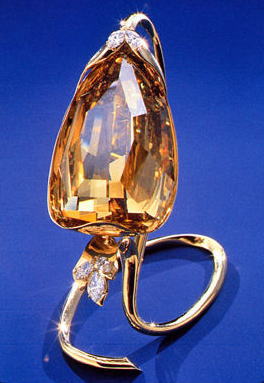 The Incomparable was found in its rough state weighing 890 carats, and was found in the Republic of Congo (formerly Zaire) in the 1980s. It was found by a young young girl playing in a pile of rubble outside her uncle’s house. This rubble had been legitimately collected from old mine dumps from a nearby diamond mine, having been rejected during the recovery process. The girl gave the diamond to her uncle, who sold it to some local African diamond dealers, who in turn sold it to a group of Lebanese buyers.

It was later purchased in Antwerp by the Senior De Beers Buyer. As a result, Sir Philip Oppenheimer, then president of the Central Selling Organization and a De Beers director, sold it to Donald Zale, chairman of the board of the Zale Corporation. He bought the diamond in partnership with Marvin Samuels, of the Premier Gems Corporation, and Louis Glick. The huge stone was finally unveiled in November, 1984. Shortly afterwards it was put on display at the Natural History wing of the Smithsonian Institute in Washington DC.

The job of cutting was given to Mr. Samuels, renowned for his expertise in faceting large diamonds. The diamond showed many problems. Its shape was irregular: it was thicker at one end, narrower at the other; sunken and pitted on one side, ridged on the other. The surface was rough, pitted, and had many cavities and cracks. Despite its problems, it was virtually free of inclusions.

Four years were spent studying and then cutting the stone. Its owners were faced with a dilemma: Should they go for a gem with a weight that would exceed that of the Cullinan I (530.20 carats) or fashion a smaller, flawless gem, by removing the internal inclusions.

The biggest piece of rough yielded a gem weighing 407.48 carats. It is the third largest diamond ever cut. Only the Golden Jubilee and Cullinan I are larger. It is internally flawless and is fancy brownish-yellow in color.

Louis Glick is said to still own the stone to this date.

I have a variety of beautiful diamonds that you may want for yourself or a loved one. If you are considering purchasing, please contact me. Since 1991, I have helped thousands of couples select diamonds and diamond jewelry. Contact me at info@galleryofdiamonds.com or call me at Gallery of Diamonds in Santa Ana, CA. 800-667-4440.

1 thought on “The Incomparable Diamond”