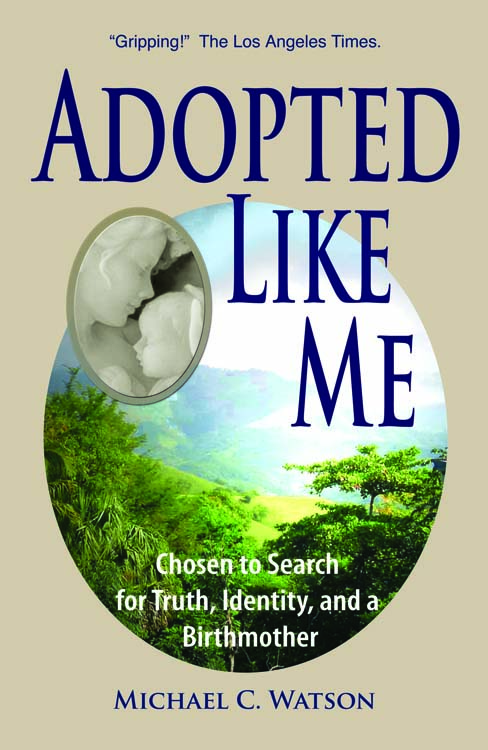 I always knew I was adopted.  That was never a secret. Mom used to call me her little adopted angel.  I felt special because I was chosen.  Dad told me that they picked me out from a large room filled with cribs of babies.  After seeing me in the middle of the room, he said, “I’ll take that curly-headed one over there!”  Mom told me that before I was born her arms would ache with envy every time she saw a mother holding a baby.

My mom could not bear a child.  After a few years of correspondence with a lawyer, a call came saying I was born, was a male, and could be adopted.  Mom and Dad drove to Indianapolis, signed the necessary papers, and returned south to the home where I would be raised — New Albany.  The small, sleepy town in Indiana was mostly a white Methodist community that lay on the north bank of the Ohio River, peering across to its larger neighbor, Louisville.

I was the talk of the town and some confused neighbors said they didn’t even know Mom was pregnant.  Nevertheless, on that day, Mrs. Watson became a mother.   By trial and error, she learned the correct amount of blankets to cover me and the safest way to secure my diaper with a pin.  I never tasted mother’s milk, but was prescribed a stinky mixture made from soybeans.  My complexion was olive; my parents were fair-skinned.  My hair was dark and coiled; my parents’ hair was straight.  Neighbors enjoyed guessing what I looked like. Some said Italian.

Mom’s name was Martha Velia.  Somehow the nickname “Micky” stuck with close friends.  And for whatever reason, Dad called her “Veeler,” disfiguring her name even more.  I remembered her as plump, gracious, and quite attractive.  She could gain complete friendship and trust with anyone she met and could also dissolve any argument between friends with caring words and tender solutions.  I always thought of her as an extreme worrier and tried to make her see the more serene side of life.  She kept a spotless house, re-painted each room a different color every two years, and hung clothes on a tight wire suspended between two mulberry trees in the back yard long after most neighbors had more efficient ways of drying garments.

Dad was a tall, thin man named Stoy.  He finished only the seventh grade and worked long hours as a pipe fitter until his retirement.  He had a hard life and, like many people living in America during the Great Depression, was more concerned with economic survival than even the most primal luxuries.  He and Mom got along fine when he wasn’t drinking.  He smoked stinky smelling Tareyton’s and then changed to a pipe.  He was the only man I ever knew who could take a drag from a cigarette so deep that smoke would pour out of his mouth after the third exhale.  The sun-filled living room was always infiltrated with horizontal layers of blue-gray smoke that would hover motionless unless a breeze came through.

I remember our three-story house.  I miss the creaks of its wooden floors, the oversized bathtub, and the panoramic view of mature maples and gentle hills from our back porch.  I used the upstairs attic for dreaming and throwing darts at monsters I had crayoned on the cardboard-thin walls.  We rented the downstairs to various occupants.  The middle layer was where my parents spent most of their lives.

Mom and I would always eat in the kitchen.  She delivered Dad’s dinner on an aluminum tray, and he would eat in the living room while watching television.  In a blend between serious and playful, he would always refer to Mom’s cooking as garbage.  He had an acute sense of smell and cautiously sniffed everything before inserting it into his mouth.

“Veeler!  Whar’s my garbage?” he would protest from the living room sofa.

“I’m coming, Stoy, just hold yer horses!” she would yell from the kitchen.  Mom would run to the rescue, spread Dad’s dinner on the coffee table like a waitress in a fine restaurant, and return to the kitchen.

I always wondered why Mom was so subservient to my Dad, and theorized it was a mixture of respect and fear.  Mainly the latter.  Our supper menu never seemed to vary: pinto beans with a strip of jowl bacon, fried potatoes, and corn bread.

Mom always had the remarkable ability to know when something was wrong, and sometimes I wondered if she could telepathically read my thoughts.  Either I was thinking aloud or she noticed I was more quiet than usual, but one time she came in my bedroom and sat on my bed.

“Where did I really come from?” I asked. “Do you know who my real mother is?”  Mom comforted me in her beautiful way by grabbing my hand and pulling me down beside her.  She concluded for the hundredth time that she and Dad were my real parents because they picked me out specially.

At ten going on eleven, I didn’t settle for that answer anymore.

“Where did I come from?”  I demanded more seriously, stressing a different word.  “Who was my mother?”

“Stoy, honey?” she projected her voice around the hallway.  “Would you come in here for a minute?” The bedsprings cringed from our weight.

Dad’s face appeared from around the corner.  He had an unusually earnest expression from Mom’s imploring tone.

“Michael wants to know about his birthmother.”

Both of them stared at each other for a few seconds waiting for the other to speak.  Dad spoke first.

“Your mother’s name was Betty Price.  She was twenty-two years old when she had you.   You were born at Community Hospital in Indianapolis.  That’s all we know, Mi-kel.  If we knew anymore, we would tell you, but that’s all we know.”  His voice was sincere with a shaky authority.

“Who was my father?”  I continued, before completely absorbing the first answer.

And with that final proclamation he returned to the living room.

I turned toward Mom again.  Her expression was the same as when I asked her about the birds and the bees.  For many years the secret was “the birds fly and the bees buzz.”  Later, she proceeded to tell me the truth, in adult language, and the whole idea of creating babies was unsettling.

“Michael, like we have always told you since you were old enough to hear, we adopted you when you were three days old.  We wanted to have a baby so badly…” She paused, realizing she wasn’t really answering my questions. “Just a minute.”  She got up, went to her bedroom, made some clanging sounds from an old tin box that she and Dad kept in their closet, and returned with a handful of papers.   “Here.  You can have these, Michael,” she said, handing me three flimsy documents with dirty blue covers.

I carefully unfolded the one on top.  It was labeled:  Decree of Adoption.   It was typed on wrinkly, onionskin paper and almost disintegrated in my hands.  I did an eyeball review of the parchment.  Other than the legal jargon, I did see the name Betty Price typed in several blanks.  The other two blue documents were titled, Petition for Custody of Child and Order.  They seemed like the same thing, but with Betty Price’s name typed in different blanks.

My life force drained as I sat dumbfounded.  If Betty Price was my real mother, then who were these people, I wondered?  The thought of being chosen was not special anymore.  I just wanted to be regular.  The abstract word, adopted, began to take on the form of an unearthly silhouette.

“Why did my mother give me up?”  I asked bravely.

“Honey, maybe she couldn’t afford to keep you.  Maybe she was unmarried and didn’t have enough money to support you.”

My stomach ached.  Was adoption good or bad?  Should I have been proud or ashamed?  I surely didn’t feel that this was a fortunate circumstance, and realized that being adopted meant that someone originally rejected me.  For years to come, the condition of being adopted would no longer be a joy, but rather a Scarlet “A” that would be stamped forever into my consciousness.

“We got you through a private attorney, Michael.  His name was Raymond Demaree.  He was the nicest old man, Michael.  I’ll never forget those black olives he gave us when we signed the papers.  We ate them right there at his desk.  The doctor who delivered you was Dr. William Fitzgerald.  He was an old man also.  Here,” she continued, handing me a crinkled postcard.  “This is where you were born.  I saved it for you.”

The postcard was a photograph of Community Hospital.  The building was rather drab, with no trees surrounding the pale brick structure.  Scribbled on the back was Mom’s handwriting, ‘Where Michael was born.’  I couldn’t believe it.  She must have planned on giving me these papers since the day I was born.  She had waited until that special time–today.  Then she handed me another paper.  It was the actual bill that my parents paid for my birthmother’s three-day stay at the hospital.  It read,

North Delaware Street.  I fantasized about her still living there.  What did she look like, I wondered?

“I could have, I guess,” she answered.  “She was probably still in the recovery room when we went to get you.  She was the farthest thing from our minds, because it wasn’t her we wanted; it was you.”

I felt like crying from the emotion and confusion, but held it inside.

“Oh, here.  Take this. ” she said as she unfolded another piece of paper. “Mr. Demaree gave this beautiful poem to us when we signed the adoption papers.  Those olives were so delicious.”

I read the anonymous poem.

To An Adopted Child
Dear, do not weep
By every act of mine I am your mother
By my sleepless nights
By every step in the long day’s design
By the clear gaze
By all your care in your beginning days
Your warm, soft body held against my breast
Comforted me and dried  my disappointed tears
You made a real home of our lonely nest

Now we look forward to the fruitful years
With you beside us bearing in your hands
The love that every mother’s heart demands
Though you may not be flesh of my flesh
Our love goes deeper still
I am your mother by the power of will
Because I did not want to walk alone
From the whole world, I chose you for my own

“We love you, Michael.  You were the greatest thing that had ever happened to me and your daddy.  Just because Betty Price gave birth to you doesn’t make her your mother.  I took care of you when you were sick, made you lunch every day for school, and put a Band-Aid on your knee every time you fell.” She smiled, gave me an unusually tight hug, and went back to the kitchen.

I didn’t ask any more questions.

From Adopted Like Me- Chosen to Search for a Birthmother.  2005 Gallery of Diamonds Publishing. Michael C. Watson.