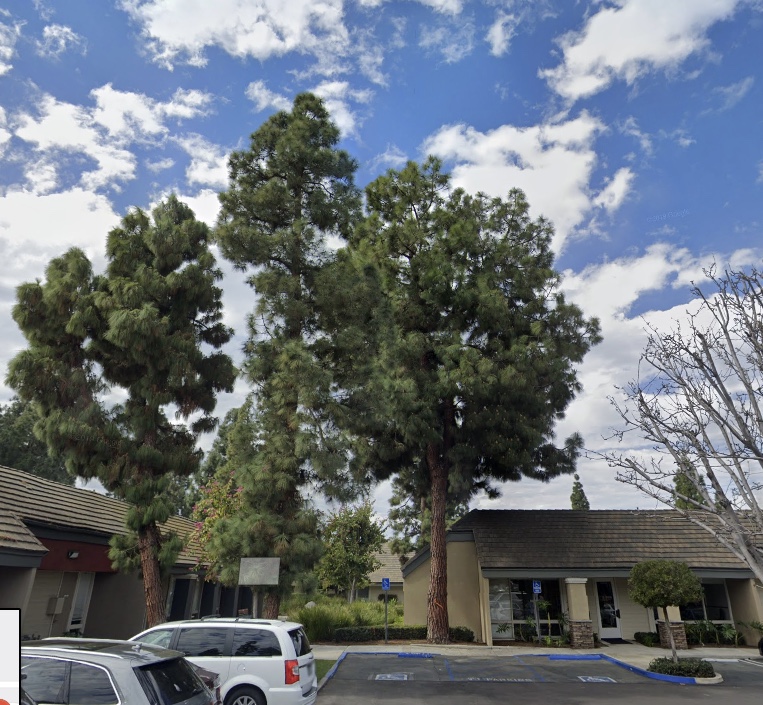 My name is Apollo.

I am a Canary Island pine tree in Brookhollow Park in Santa Ana, California. I am the greeter and the first tree you notice when you visit the park from the north entrance. I stand alongside the management’s office so I always try to look confident.

When I see you coming I stand at attention and cheerfully welcome you with my long, green-glowing needles.

I was given my Greek name because it means Father of Light. I don’t mean to brag, but I have this talent to convert energy from sunlight called photosynthesis. I transform carbon dioxide into oxygen and “exhale” it for humans and animals to breathe.

I was planted here forty years ago when the park was young. This is Lenora next to me. I remember when she was planted shortly after me. We always joked that if the arborists did not straighten her she would end up with an awkward slant. The arborists never returned so now I affectionately call her Leaning Lenora.

Every Sunday a nearby church holds a big picnic under me and Lenora. The smoke from the BBQ flutters high in our branches. The congregation always laughs and has a good time while Lenora and I shade them from the hot sun. The same little boy always comes close to me in search of lizards or interesting bugs to catch. One time he gave Lenora a hug. Her needles beamed with joy.

Last Saturday morning I heard a familiar snorting sound of an old truck. It was Happy Green Tree Trimming Service! It had been years since my branches had been pruned and my canopy had become huge.

Rather than the normal two or three workers there were eight men who got out of the truck. I have gotten quite tall and I supposed I now needed several people to trim me.

The large crane escalated. I heard the comforting hum of the chainsaw. A large branch crashed onto the ground. Then another branch tumbled. Another man pointed at a limb and soon it was completely sawed off. They were cutting too much of me!

This was not a normal trim. They were sawing too many of my arms. The cool blanket of my shadow on the pavement revealed more and more scalding patches of sun. The workers wiped their faces as they began to perspire.

I noticed that the parking lot was blocked off from visitors. There was no one to save me. Lenora’s needles darkened from panic. Squirrels darted in fright. Hummingbirds buzzed frantically high in my branches, sensing that their babies were in danger.

Another major arm fell. ‘What did I do wrong?’ I wondered. For forty years I have proudly fulfilled my job, which was to stand and be beautiful. I gave shade to the mother duck and her ducklings who marched past me everyday in a military-style single file. I let all the squirrels and birds play in my branches. Perhaps the management got upset when I accidentally dropped a pine cone on the roof.

Although I never felt pain I still asked, Why me? I would never wish misfortune on any friend but Lenora was the one who leaned. I stood perfectly straight. I was faithful in my duties. I was careful that my root system was never invasive and never harmed the management building. In forty years I never caused a single crack in the sidewalk.

“Stand back!” another worker yelled as another one of my arms jolted the pavement.

With all of my being I summoned the remainder of my branches to search for clues. If I was going to be killed I wanted to know why. It just didn’t make sense to destroy me when I helped the Earth eliminate harmful carbon emissions. Using my needles like a million eyes I spotted a sign in the window of an adjacent suite. I can’t read but I took a mental picture. It said, ‘For Lease.’

“Search, seek, and find!” was my final command to my last arm. Then I noticed strange hieroglyphics scribbled in white paint on the backside of my trunk. I snapped another mental image. It read, ‘Marked for Removal #23.’ With my underground communication system I finally understood the horror of my friends Jasmine, Pax, Zella, Astoria, Dorian, and Stacia. Last week they transmitted extreme stress. They must have all been cut into pieces!

As my final limb crashed, the truth was revealed. One worker pointed towards me and said, “That’s where the big sign will go.”

“Didn’t you hear? Another church called Praise the Planet will be moving here. The management said they would remove the tree and allow them to erect a sign if they agreed to a five-year lease.”

By the afternoon I was divided into dozens of giant logs that rested heavily on the earth. The normal swath of shade was now a lake of burning sunlight that scorched the parking lot. My last remain was my huge stump, which displayed forty perfect rings for each year of my life.

The youngest worker plopped down onto my stump in sweaty exhaustion. The manager of Happy Green Tree ordered the worker to stand. “We were here to do a job,” he began. “But this magnificent tree did not deserve to die.”

By the next morning the logs had been hauled away. Even my stump was removed and covered with mulch and decorative rocks to hide the evidence I was ever there. I will really miss chatting with Leaning Lenora. I will also miss that little boy on Sundays.

Like oxygen emerges from carbon dioxide, I suppose life emerges from death. Although you can no longer see me my spirit will always live in Brookhollow Park. I will eternally hold happy memories of the sun, the moonlight that filtered through the arms of my friends and the refreshing rain.

If you ever stop by tell Lenora I said hello. If you find a pinecone please remember me.

My name is Apollo.