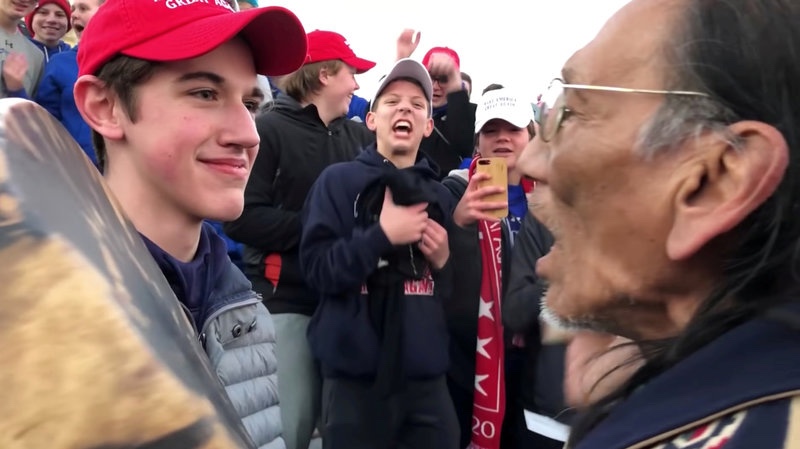 On January 19, 2019, a teenager named Nicolas Sandmann was attending a Right to Life march in Washington DC. Wearing a red “Make America Great Again” cap and a persistent smile by the Lincoln Memorial Sandmann faced a native Indian activist named Nathan Phillips who chanted and banged on a drum.

Did he mock Phillips with a condescending glare?

Or did Sandmann just motionlessly and quietly try to diffuse a tense situation by allowing the activist to express himself?

Sandmann family sued the Washington Post, the newspaper that wrote a total of seven articles that leaned towards Sandman mocking an indigenous person. But it was too late, the video of the smirking kid with the MAGA hat had already gone viral. We heard a tearful reply from Phillips. There was no response from Sandmann until he later wrote an official statement of his side of the story

“I never interacted with this protestor. I did not speak to him. I did not make any hand gestures or other aggressive moves. To be honest, I was startled and confused as to why he had approached me. We had already been yelled at by another group of protestors, and when the second group approached I was worried that a situation was getting out of control where adults were attempting to provoke teenagers.

I believed that by remaining motionless and calm, I was helping to diffuse the situation. I realized everyone had cameras and that perhaps a group of adults was trying to provoke a group of teenagers into a larger conflict.”

“Yeah, I will pray for them. (Sandmann’s school group.) That’s what the whole part was was a prayer. The use of the drum, the song, that was a prayer. What I said to them at the end was, “Relatives!” and I got their attention and I said, “Make America great.” They said, “How?” What they were doing wasn’t making America great. … the whole idea, the spirit of America, that wasn’t it. That wasn’t American spirit there that they were putting out there.”

So what really happened? We see an indigenous person with a drum. We see a teenager wearing a hat that invokes pride in some and bigotry in others.

Do we see what we want to see?

Do we hear what we want to hear?

Look at the picture. What do you see?