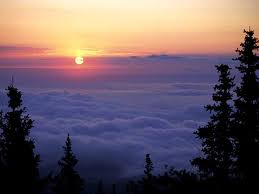 I came to work as usual on Saturday and the answering machine blinked one message.  It was Mom, who instructed me to take the next plane back to Indiana, for Dad was in serious condition and was on a breathing machine.

In less than an hour I was strapped inside an airplane.  Dad had smoked most of his life and still inhaled even when he switched to a pipe.  He was diagnosed with emphysema many years ago and now, on top of that, he had pneumonia.

While peering through the small oval window I remembered that Dad never seemed to show much enthusiasm in any of my school projects or hobbies, thinking that he just wasn’t interested.  I also remembered him frequently protesting about his difficulty in breathing.  Every time I asked what he wanted for his birthday he would just say he wanted to breathe.

Some relatives rushed me from the airport to the hospital.   Mom greeted me with a kiss, then began to cry as she prepared me for what I was about to witness.  Holding hands, we quietly walked through the double doors marked “Critical Care.”

The small room was painted icy green, revealing one little window that separated one from the outside world.  Then I saw five elevated bottles of intravenous liquids that cascaded down into Dad’s body.  Thick plastic tubes entered his nostrils and downwards towards his lungs.  The only sound one could hear was the amplified sucking of the respirator machine.

He recognized me and gave a brief smile.  Then he continued to look at me.  His wrists were bound to prevent him from pulling at the tubes, and since his larynx was blocked it was impossible for him to speak.  He released the “call nurse” button to hold my hand.  His grasp was weak but felt warm.

The respirator continued to pump life into his lungs.  The oxygen level was set at one hundred percent, which was many times the amount one needs to sustain life.

His eyebrows raised and he struggled to lift his upper lip, as if to speak.

“He can’t talk,” a nurse said that had just appeared from behind me.  She wore a pleasant smile and gleamed with sensitivity.  Then turning towards Dad, she said,  “We  know you can’t speak with those tubes in your throat, sweetheart.  Just relax.  You need some rest.”

“What does he want?” I asked the nurse.

“Usually they want to be raised up in bed, turned over, or ice to soothe their throat.”

“Would you like ice?”  I said, hoping for a positive response.

He nodded and I was overjoyed from understanding him.  I spooned a tiny cube into his mouth.

He fastened onto the call button once again, as if awaiting for that critical time to press it, perhaps if his pain became intolerable.  Then his eyes started to rise back slowly and his lids began to close.  When Dad slept I had noticed years ago that sometimes his right eye did not close all the way.    I imagined him wandering through time; remembering how he skipped stones across the pond with his brothers, and then advancing through a collage of friends he had garnered from his pipe fitting profession.

Mom patted me on the shoulder and said she was going back to the waiting room.  She was tired, and had been there day and night for the last three nights.  Just before she left she touched my arm and whispered faintly, “Don’t let him see you cry.”

The machine inflated his lungs with pure oxygen at slower intervals.  “Breathe.  Damn it.  Breathe!”  My brain screamed.   I sat beside him and rested my chin on the ice cold bed rail.  On that long walk through the corridor Mom told me the doctor said he had a poor chance of making it off the respirator.  I began to weep.  He reopened his eyes and saw my sadness.  I remembered Mom’s last words and despised myself, thinking that sorrow was not therapeutic.

He lifted his eyebrows again.

“Ice?” I said, wiping my tears nonchalantly.  He shook his head.

“Turned over?”  Wrong again.  Then he lifted his hand and appeared to write an invisible word into the air, one letter on top of the other.  I shifted my attention between his eyes and hand but could not interpret his message.

Then I grabbed a sketch board I had observed behind me.  I unclamped the pencil and folded it in his hand.  With his eyes fixed at the ceiling, his trembling hand arduously dragged the graphite across the paper.  He had written “Mom”.  Was he talking about my Mom?   His Mom?  Then he looked towards me.  Then back to the ceiling.  Then towards me.

“I’m sorry, Dad.  I know you can’t talk.  I’ll be right back.  The nurse will know what you want to say.”  I couldn’t bear thinking what he was trying to express as I ran outside.

The friendly nurse took my sketch board inside the room and returned in five minutes.  Her words were evenly paced, serene, and seemed like she had spoken them many times before.  “You’re father is saying that he is ready to go to heaven.”

Then I went to the waiting room.  When I saw Mom I cried.  She embraced me and said the doctors would now wean him from the machine.

His eyes were half closed as we returned.  A nurse wearing the name tag Alice injected a clear liquid into the IV, telling us it would help him sleep.

The phone rang early the next morning.  It was the friendly nurse, instructing Mom and me to return to the hospital.

When we arrived he was gasping as if he had run several miles.  The respirator had now been adjusted to require him to breathe on his own.  Over the last few days, the one hundred percent level had been gradually reduced, and now read thirty-five percent.  He squirmed uncomfortably.

“We’re right here, Dad,” I spoke, trying to smooth the opening quiver from my voice.   Mom and I grabbed each of his freed hands.

The nurse warmly placed her arm around Mom.  I’m sure she had seen so many patients die.  She looked at her watch every thirty seconds or so and squinted at the monitor above his bed.  Her face revealed the grim combination of compassion and realism.

“You’re gonna be okay, Dad,” I said, kneading his hand.  And then I realized that was the first time I ever lied to Dad.  He was not going to be okay, at least in this physical world.  His irises slowly disappeared into his head and he seemed to sway back and forth from the realm of consciousness.

“I love you, Dad,” I said, weeping on his hand as I pressed it against my cheek.  He reopened his eyes.  As we continued to look at each other I was certain that somewhere in his dreamy state his mind struggled to understand, if I truly loved him, why was I letting him die.  I turned towards the respirator again.  The control panel lights glittered.  I was compelled to touch it, adjust it, anything.  I could have merely turned the oxygen knob back to fifty or sixty percent and he would be better again.

The nurse looked back and forth from her wristwatch to the monitor.  It was as though she matter-of-factly knew the precise time Dad would pass away.

With Dad’s hand against my face I witnessed the vital levels on the monitor plunging.  His breathing became slow and shallow.  Then the monitor started blinking.  The nurse looked at her wrist once more and nodded to Mom.

“He’s gone, Michael.  He’s gone.”  Mom broke into tears.  I gently returned his hand by his side.  His call button was still within reach, and although he held on to it for so many days he had never pressed it.  Alice returned with a warmed, white blanket and tenderly placed it from his feet to his torso.