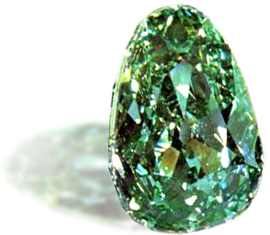 Green diamonds of any size are truly rare. The Dresden Green, which probably weighed over 100 carats in its rough form, is unique among world famous diamonds. The color is usually caused by the crystal’s coming into contact with a radioactive source at some point during its million year creation.

The Dresden Green gets its name from the capitol of Saxony where it has been on display for more than 200 years. The earliest known reference to its existence occurs in The Post Boy, a London new-sheet of the 1700’s. The issue dated October 25th – 27th, 1722 included this article:

“On Tuesday last, in the afternoon, one Mr. Marcus Moses, lately arrived from India, had the honor to wait on his Majesty [King George I (ruled 1714-27)] with his large diamond, which is of a fine emerald green color, and was with his Majesty near an hour. His Majesty was very much pleased with the sight thereof. It is said there never was seen the like in Europe before, being free from any defect in the world. He was also, the 25th, to wait on their Royal Highnesses with his large diamond; and they were surprised to see one of such largeness, and of such a fine emerald color without the help of a foil under it. We hear the gentlemen values it at £10,000.”
From 1756 to 1763 during the continued hostilities of the Seven Years War, the contents of the Green Vault were removed for safety to the fortress of Königstein, located in southeast Dresden by the Elba River. Several years after the war, which saw the defeat of Saxony, Pallard’s Golden Fleece ornament was also broken up. In 1768 another jeweller, Diessbach, worked the green diamond into a hat clasp along with two other white brilliants, weighing almost 40 carats total, and a number of smaller diamonds.

The Gemological Institute of America (GIA) examined the stone in 1988. The Dresden Green Diamond proved to be VS1 in clarity with the potential of being internally flawless.

The Dresden Green remained at the Smithsonian until January of 2001, when it returned the Albertinium Museum in Dresden, where it remains to this day.

Sources: The Harry Winston website, Famous Diamonds by Ian Balfour, The Nature of Diamonds by George E. Harlow, the Gemstone Forecaster, and various sites scattered around the internet.

The Dresden Green Diamond is definately not the average type of diamond I sell, but I do have a variety of unmounted diamonds from a quarter-carat up to five carats. I would love to brag about selling a huge natural green diamond, but those transactions are few and far between. If you are considering purchasing a diamond for yourself or for the person you love, please contact me first. Since 1991, I have saved thousands of couples from paying an inflated price on diamonds and diamond jewelry. Contact me at info@galleryofdiamonds.com or call me at 800-667-4440.

3 thoughts on “The Dresden Green Diamond”