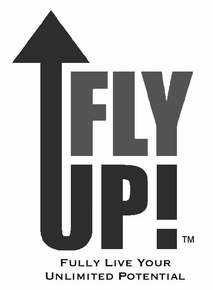 There are so many things that excite me, and sometimes I become enthralled in subjects in what many would call trivial. One day I became fixated on the word combination of “unlimited potential.” It was such a positive expression, and seemed to summarize my belief in the awesome capabilities of humans. I then realized that it made a positive acronym- “Up!” As I worked with my new word, I wanted to personalize it and later added the word “your” for “Your Unlimited Potential.” However, the word “Yup” was comical and did not give justice to these three words.

After brainstorming for a better word or phrase, the words “Fly Up” appeared. This uplifting expression demanded beautiful words to define it. Now it was up to the imagination to discover two more words for the letters F and L. I asked friends for advice and received a wild mixture of words and phrases. When “Fully Live Your Unlimited Potential” was discovered, it deserved a logo that would represent its glory. I sometimes interchange “Fully” with “Fearlessly”, which more specifically addresses the emotion that stifles the greatness that is latent in each of us.

The invention of this name and concept came shortly after we created the Raise Your Umbrella program. The all-inclusiveness of Fly Up! made it a higher form of Raise Your Umbrellla. It elevated itself to the fifth and highest level of Abraham Maslow’s Hierarchy of Needs. When you accomplish each of the requirements for Raise Your Umbrella, you have reached the highest rung of the ladder. It is then that you Fly Up!

Fly Up! Is now an inspirational life and sales training program that is taught at Gallery of Diamonds jewelers, Why Mom Deserves a Diamond, Inc., and in schools on College and Career Day.